“If we did all the things we are capable of doing, we would literally astound ourselves. “

This post is an Ode to Thomas Edison.  This all started when I was in West Elm and saw a glass-globe light of glorious-ness!  (picture below) 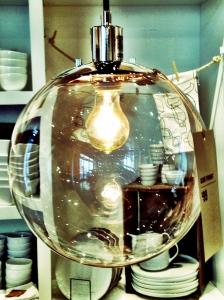 I was in a design frenzy over stimulated and resisting the urge to act like a vacuum and grab everything in sight, when I saw this beautiful glass pendant floating ever so gently from the warehouse-esque ceiling above.  I literally stood there staring at it…trying to figure out why it was so awesome and why its awesomeness had distracted me enough to stop me from committing a debt causing crime (purchasing unneeded items on my credit card).

Then as I stared longer (and started creepily taking pictures with my I-phone). I realized it was the exposure of the filaments that was so uniquely eye-catching.  The seemingly flawless glass globe was allowing the light source to be seen, something that is quite unusual in a light fixture.

I have seen this trend emerging.  The exposure of technology within.  Why would we want to cover up one of the most incredible inventions of modern time?  The miracle of light.  These filaments looked like living beings buzzing with electrical currents.  Pure light from the source!  I then stared at it longer, decided that  I did in fact love it…while also acknowledging that there was nowhere in my 23 old life that it would fit-and moved on.

I then continued on with the my day..not thinking too much back to the light.  The next afternoon we went out to lunch in Cambridge and as I approached the alley door entrance what did I see?  Filament exposed light fixtures bouncing overhead!  (clearly Thomas Edison was feeling neglected and was somehow trying to remind me not to take advantage of my ability to see after the sun has sunk into the night sky.)  SO, I surrendered to the urge and took some more photos and later went home and did some research on Mr. Edison.  Not only did I find out more information then necessary about his inventions but I also discovered a PLETHORA of inspiring quotes.

One I found particularly intriguing.

“We are like tenant farmers chopping down the fence around our house for fuel when we should be using Nature’s inexhaustible sources of energy — sun, wind and tide. … I’d put my money on the sun and solar energy. What a source of power! I hope we don’t have to wait until oil and coal run out before we tackle that.”

This quote came from a conversation Edison had with Henry Ford in 1931.  I would say he was a few steps ahead of his time.  Too bad he was so right.

Here are some more photos from my light bulb obsession journey as well as some work from others. 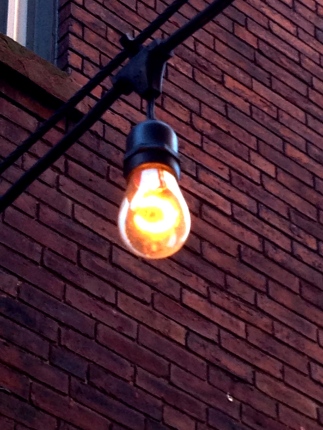 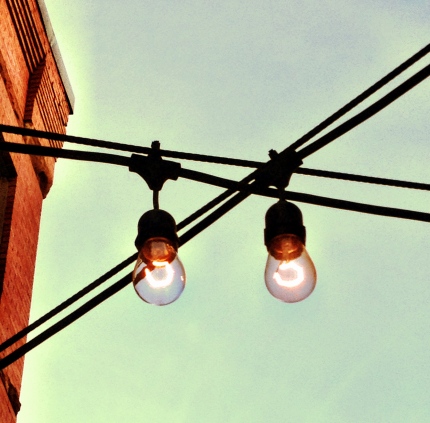 (First four photos left were taken in the brick alley entrance to the ‘Russel House’ (delicious lunch, great beer selection.  I would definitely recommend it if you are in town)